Biblical Gender Roles in the Church & the Family - A Controversial Question

How does God define gender roles within His Word? Is it a cultural issue of the day and time in which the Bible was written? Or are the command and descriptions of gender roles rooted in the created order as God intended? Dr. Al Mohler's recent article, "A 'Stained-Glass Ceiling?' A Clarifying Look at a Controversial Question" helpfully deals with a long-debated issue concerning women's roles in ministry within the church. He engages a recently published op-ed column of USA Today, showing the fallacies underlying such a secular, feminist viewpoint. Some excerpts: If you ever want to dive into this issue for a better understanding of the biblical texts and theology of biblical manhood and womanhood, here are some resources to check out: The Council on Biblical Manhood & Womanhood - proclaiming God's glorious design for men and women

What's at stake in considering this issue?

Fifty Crucial Questions: An Overview of Central Concerns About Manhood and Womanhood by John Piper and Wayne Grudem

"Fifty Crucial Questions is a booklet adapted from chapter two of Recovering Biblical Manhood and Womanhood by John Piper and Wayne Grudem.

It offers an overview of the vision of manhood and womanhood presented in the larger volume by giving cogent summary responses to the most common objections to that vision. Because every effort to answer one question (on this important issue) begets new questions, the list of questions here is not exhaustive. Nonetheless, we hope to give enough trajectories that readers can track the flight of our intention to its appointed target: the good of the Church, global mission, and the glory of God. "

Here are the chapter titles and authors of this book.... For Single Men and Women (and the Rest of Us) John Piper A Vision of Biblical Complementarity John Piper An Overview of Central Concerns John Piper and Wayne Grudem Male-Female Equality and Male Headship Raymond C. Ortlund Jr. Women in the Life and Teachings of Jesus James A. Borland Head Coverings, Prophecies, and the Trinity Thomas R. Schreiner "Silent in the Churches" D. A. Carson Role Distinctions in the Church S. Lewis Johnson Jr. Husbands and Wives as Analogues of Christ and the Church George W. Knight III What Does It Mean Not to Teach or Have Authority Over Men? Douglas Moo Wives Like Sarah, and the Husbands Who Honor Them Wayne Grudem The Valuable Ministries of Women in the Context of Male Leadership Thomas R. Schreiner Men and Women in the Image of God John M. Frame The Church as Family Vern S. Poythress The Meaning of Authority in the Local Church Paige Patterson Women in the History of the Church William Weinrich The Biological Basis for Gender-Specific Behavior Gregg Johnson Psychological Foundations for Rearing Masculine Boys and Feminine Girls George Alan Rekers The Inevitability of Failure: The Assumptions and Implementations of Modern Feminism David J. Ayers Is It Legal for Religious Organizations to Make Distinctions on the Basis of Sex? Donald A. Balasa The Family and the Church George W. Knight III Principles to Use in Establishing Women in Ministry H. Wayne House The High Calling of Wife and Mother in Biblical Perspective Dorothy Kelley Patterson Where's Dad?: A Call for Fathers Weldon Hardenbrook Women in Society: The Challenge and the Call Dee Jepsen The Essence of Femininity Elisabeth Elliot Charity, Clarity, and Hope John Piper and Wayne Grudem The Meaning of "Head": A Response to Recent Studies Wayne Grudem

May the Lord raise up more godly men to lead and teach their wives, children, and churches.

Is It True that Mary Never Died? Did Mary Ascend to Heaven? 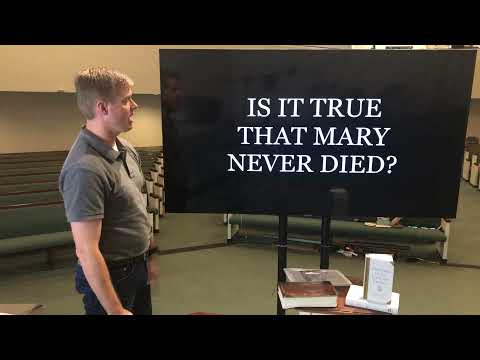